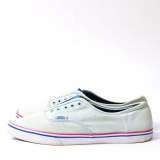 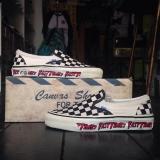 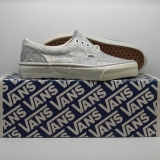 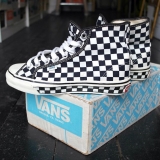 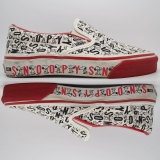 On March 16, 1966, at 704 East Broadway in Anaheim, California, U.S., brothers Paul Van Doren and James Van Doren, Gordon Lee, and Serge D’Elia opened the first Vans store under the name The Van Doren Rubber Company. Paul Van Doren and D’Elia owned the majority of the company, while James Van Doren and Lee each owned a 10 percent stake. The business manufactured shoes and sold them directly to the public. On that first morning, twelve customers purchased Vans deck shoes, which are now known as “Authentic”. The company displayed three styles of shoes, which were priced between US$2.49 and US$4.99, but on the opening day, the company had only manufactured display models without any inventory ready to sell—the store rack boxes were actually empty.[3] Nevertheless, the twelve customers selected the colors and styles they desired, and were asked to return later in the afternoon to pick up their purchases. Paul Van Doren and Lee then rushed to the factory to manufacture the selected shoes. When the customers returned that afternoon to pick up their shoes, Paul Van Doren and Lee realized that they had forgotten to maintain a cash reserve to provide change to customers. The customers were therefore given the shoes and asked to return the following day with their payments. All twelve of the customers returned the following day to pay for their items.

The company continued to grow into the 1970s. Skateboarders who liked Vans’ rugged make-up and sticky sole were seen wearing Vans all over Southern California in the early 1970s. In 1975, the Vans “#95”, known today as the “Era”, was designed by professional skateboarder Tony Alva and skateboarding figure Stacy Peralta. With a padded collar and different color combinations, the Era became the shoe of choice for a generation of skateboarders due to the non-slip bottom being more conducive for a better grip. In 1976, Vans introduced the “#44” shoe, and with the help of skateboarders and BMX riders, the Vans “Slip-On” became popular in Southern California. By the end of the 1970s, Vans had established seventy stores in California, U.S., and sold through dealers, both nationally and internationally. During this period the company also produced wool-lined canvas and rubber mukluks, under contract to the U.S. Department of Defense and the U.S. Air Force.