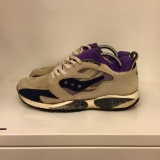 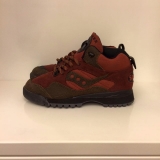 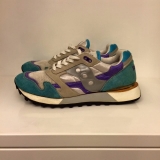 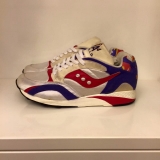 The company’s first factory was founded in 1898 at Kutztown, Pennsylvania, on the high banks of the Saucony Creek. In 1910, Russian immigrant Abraham Hyde started a shoe company in Cambridge, Massachusetts, called Hyde Athletic Industries.  Over the years, Hyde became known for making athletic footwear including brands such as SpotBilt and PF Flyers; Hyde Athletic Industries bought Saucony in the late 1960s, and moved it to Cambridge. By the late 1990s, when Saucony became Hyde’s dominant brand, the name of the company was officially changed from Hyde Athletic Industries to Saucony. In June 2005, the Stride Rite Corporation (maker of Keds, Sperry Top-Sider and other brands) announced an agreement to acquire Saucony. Both companies are based in the greater Boston, Massachusetts area: Lexington. Stride Rite was acquired by Payless ShoeSource in Autumn 2007.