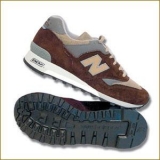 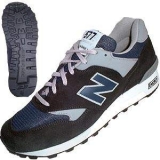 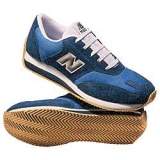 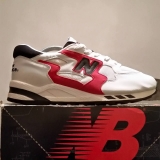 In 1906, William J. Riley, British emigrant, founded the New Balance Arch Support Company, manufacturing arch supports and other accessories designed to improve shoe fit in the Boston area. His first product, a flexible arch support, was designed with three support points to provide greater balance and comfort in the shoe. It is believed that Riley came up with the name “New Balance” by observing chickens in his yard and demonstrated the way his arch supports worked by keeping a chicken foot on his office desk. He explained to customers that the chicken’s three-clawed foot resulted in perfect balance. In 1927, Riley hired Arthur Hall to be a salesman. In 1934, Hall became a business partner and found his niche by marketing to people whose jobs required them to spend much time standing. In 1956, Hall sold the business to his daughter Eleanor and her husband Paul Kidd.

Eleanor and Paul Kidd continued to sell mainly arch supports until 1960, when they designed and manufactured the “Trackster”, the world’s first running shoe made with a ripple sole. It was also the first running shoe to come in varying widths. The “Trackster” was given a big boost through the YMCA programs in which it became the unofficial shoe. College track teams such as MIT, Tufts University and Boston University adopted the New Balance Trackster for their cross-country teams, soon to be followed by other colleges and private high schools around the country. Marketing was mostly word-of-mouth or local sports fairs. Sales languished until 1972 when current Chairman Jim Davis bought the company the day of the Boston Marathon. At the time, the company consisted of 6 people making 30 pairs of shoes daily and selling products mostly through mail-order with a few U.S. retailers. Jim committed himself to uphold the company’s traditional commitment to individual preferences, customer service and quality products. His future wife Anne, who joined the company in 1978, focused on building a distinct culture for New Balance employees and customers. Their timing was perfect, as the Boston area became a center for the running boom that struck the U.S. in the 1970s. Their product line expanded and sales grew rapidly. The company prospered, and the Davises looked to expand New Balance into a global company. The company is now run by Rob DeMartini. DeMartini’s background includes Procter & Gamble and Gillette Shave Company. Today, 30% of the New Balance shoes sold in the European market are manufactured at the New Balance facility in Flimby, England.