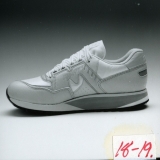 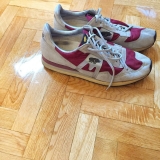 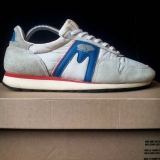 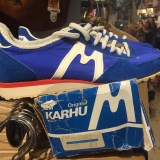 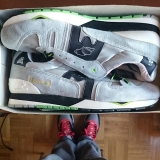 The Karhu brand was established in Finland in 1916 by the company Ab Sport Artiklar, which used a bear as its logo. In 1920, Ab Sport Artiklar changed its name to Karhu. In addition to the discuses and javelins that were Karhu’s main products, the company also produced running shoes and track spikes.  The Karhu brand featured prominently at the 1920 Antwerp Olympic Games, where Finnish athletes took all three medals in javelin using Karhu javelins, and the “Flying Finns” took five gold medals on the track wearing Karhu spikes. Four years later, at the 1924 Summer Olympics in Paris, Paavo Nurmi won five gold medals in track events “wearing a conspicuous pair of white Karhu running spikes”.  In the 1930s Karhu’s production expanded to include cross-country and ski jumping skis. During the Winter War and Continuation War, from 1939–1945, Karhu produced snow-camouflage suits, tents and skis for the Finnish military.

In 1951, Karhu sold the three stripes trademark it had been using to a then little known German brand called Adidas for the equivalent of 1600 euros and two bottles of whiskey. In the 1960s Karhu began to use the M-logo,  which is still in use on Karhu shoes. In the 1960s and 1970s, Karhu’s innovations included the first use of nylon and air cushioning in running shoes. The 1960s also saw the development of Karhu’s line of pesäpallo (Finnish baseball) equipment. In 1966, the Karhu company changed its name to Oy Urheilu Karhu Sport Ab, and in 1972 to Karhu-Titan. ] By the 1980s the brand had started to struggle and sold off its outdoor shoe division to Merrell. However, a collaboration of research and design with the University of Jyväskylä led to the development of “Fulcrum technology”.