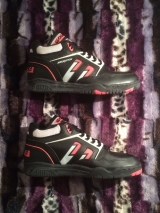 Gola is a manufacturer based in England. It was founded on 22 May 1905. It used to be known as the Bozeat Boot Company, and was based in the Northamptonshire village of Bozeat. Gola was purchased by the Jacobson Group and has since expanded its range. The company produces mainly track suits and trainers of which the models known as “Harrier” and “Chase” are particularly popular, especially in continental Europe. During the 1970s, Gola’s licensing was held under Electronic Rentals Group and its principal Chairman, Roy Keith Black. Black pushed several million pounds into Gola and developed the Gola Bag of 1972.