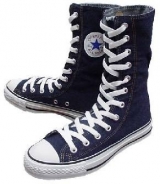 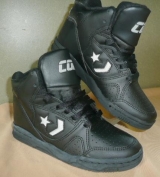 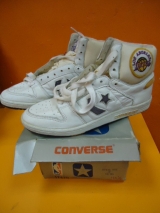 In his mid 30s, Marquis Mills Converse, who was previously a respected manager at a footwear manufacturing firm, opened the Converse Rubber Shoe Company (unrelated to the Boston Rubber Shoe Company founded by fourth cousin Elisha Converse) in Malden, Massachusetts in February 1908. The company was a rubber shoe manufacturer, providing winterized rubber soled footwear for men, women, and children. By 1910, Converse was producing 4,000 shoes daily, but it was not until 1915 that the company began manufacturing athletic shoes for tennis. The company’s main turning point came in 1917 when the Converse All-Star basketball shoe was introduced. Then in 1921, a basketball player named Charles H. “Chuck” Taylorwalked into Converse complaining of sore feet. Converse gave him a job: he worked as a salesman and ambassador, promoting the shoes around the United States, and in 1932 Taylor’s signature was added to the All Star patch on the classic, high-topped sneakers. He continued this work until shortly before his death in 1969. Converse also customized shoes for the New York Renaissance (the “Rens”), the first all-African American professional basketball team. On March 2, 1962, Wilt Chamberlain, an American basketball player for the Philadelphia Warriors, scored 100 points in a game while wearing his pair of Chucks, taking a 169–147 victory over the New York Knicks. Converse lost much of its apparent near-monopoly from the 1970s onward, with the surge of new competitors, including Puma andAdidas, then Nike, then a decade later Reebok, who introduced radical new designs to the market. Converse found themselves no longer the official shoe of the National Basketball Association, a title they had relished for many years. While being employed at Converse, one of its employees, Jim Labadini (1968–78), created the chevron and star insignia / logo that still remains on most Converse footwear items that are not classic Chuck Taylors.