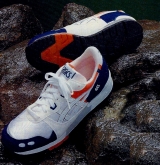 ASICS Corporation was born in 1977 when Onitsuka Tiger merged with GTO Sports Nets & Sportswear. The acronym ASICS, “Anima Sana In Corpore Sano”, meaning “A Sound Mind In A Sound Body” was chosen as the name to promote the philosophy that sport is the best way to create a healthy and happy lifestyle. Derek Clayton, sponsored by ASICS, broke the world marathon record of 2hrs 10mins. At major sporting events through the 70’s many athletes wore ASICS shoes, including 5,000 meter and 10,000 meter runner Lasse Viren, who, despite falling in the twelfth lap of the 10,000 meter finals, went on to win gold at the 1972 Munich Olympics. In the 70’s ASICS committed to designing footwear specifically for women. This historic improvement in the fit of women’s shoes attracted world-class female athletes to compete wearing ASICS.

The new sporting heroes of the 80’s brought more attention to international sporting events. And like the various athletes who continued to aspire to higher challenges, ASICS pressed on to meet the challenges for better shoe technology. In 1979 the ASICS research facility in Kobe branched out into a research laboratory for evaluating shoe design and features. In 1985 it officially became the research and development center of ASICS. The introduction of the ASICS GEL cushioning system revolutionized the footwear industry. This unique cushioning system introduced the ability to absorb shock by dissipating vertical impact and dispersing it into a horizontal plane. Still utilized today, the ASICS GEL cushioning system is found throughout the footwear lin